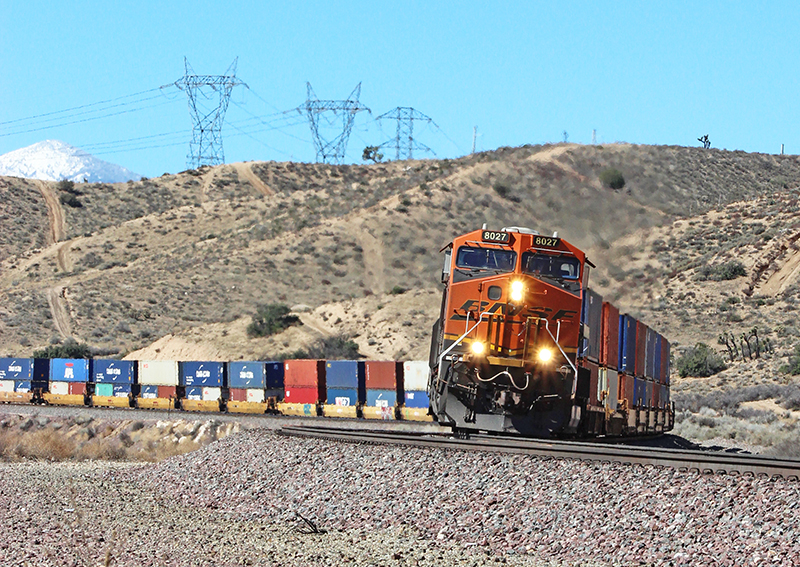 On the backside of Cajon Pass at Lugo, Calif., BNSF ES44C4 8027 and three more General Electric diesels guide a stack train toward Hesperia. In the upper left, the San Gabriel Mountains are coated with fresh snow from a vigorous storm.

Cajon Pass and its four main lines have been tweaked to accommodate more trains than ever before. But is it really as active as it once was? A stop in the winter of 2018 seemed in order to check the pulse of this bustling rail passage. There is life, but Cajon is far more overrun by motorists and humanity than train traffic. Interstate 15 is clogged by commuters as residents opt for the less expensive and less crowded housing possibilities found in Hesperia and Victorville, Calif., while maintaining their jobs in San Bernardino and Los Angeles County. Highway 138 has enough traffic to warrant straightening out the numerous hairpin turns leading up to Summit.

There’s one less railroad traversing the pass than years ago, and one less pair of Amtrak trains making a run. And Cajon suffered through a massive fire in August 2016 that brought all activity to a momentary standstill. In hindsight, it was only a flash before the healthy signs of commerce were rolling again. 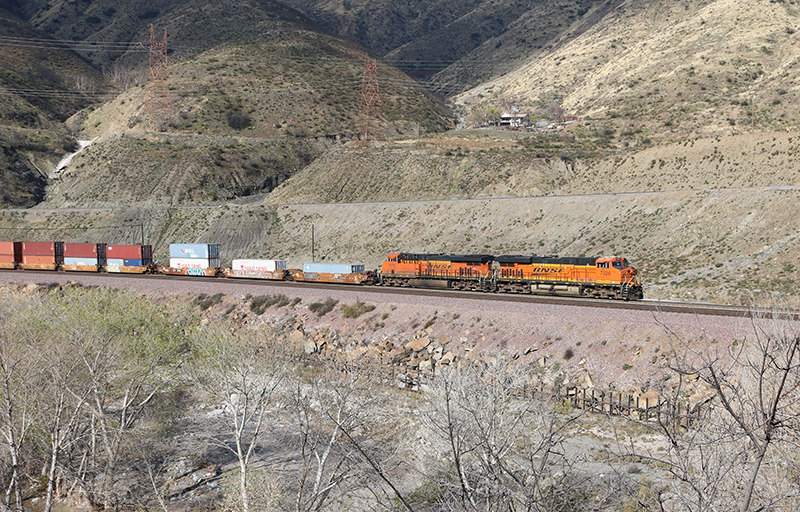 Rounding the curve at the lower end of Blue Cut, BNSF 7326 and 7170 pull a stack train upgrade on this March day. The scene would be played out maybe two dozen more times in the next 24 hours with perhaps an equal amount of opposing moves. There would be lulls, casting another layer of tranquility on top of an already subdued environment. Or so it seems compared to the old days and the memory of an endless parade of Santa Fe, Union Pacific, and Southern Pacific trains.

This particular visit, you could easily find a slot for a sit-down lunch, seek relief from some of the nasty weather, then return to grab one or two other movements without missing a whole lot. A break at a Hesperia restaurant allows for a flashback of trains 30-plus years ago that were thankfully not missed:

They were the classic freights of their day — now replaced by the wide cab GEs and EMDs of BNSF and today’s Union Pacific. Each day comes and goes with a train here and a train there. About half the motive power consists include at least one locomotive that has been tagged with graffiti.

Bouncing around Cajon at a considerably slower pace means checking some photo angles that failed to make the slide file three decades ago. At Lugo, two eastbound BNSF freights negotiate a soft “S-curve” on separate days in a most accommodating fashion. If you missed either shot, it’s on you!

The “Big Orange” continues to oblige with a choice of three eastbounds turning the corner at Summit in nice lighting, providing a different scene than the old Summit “overview” and the “mound” at Silverwood. 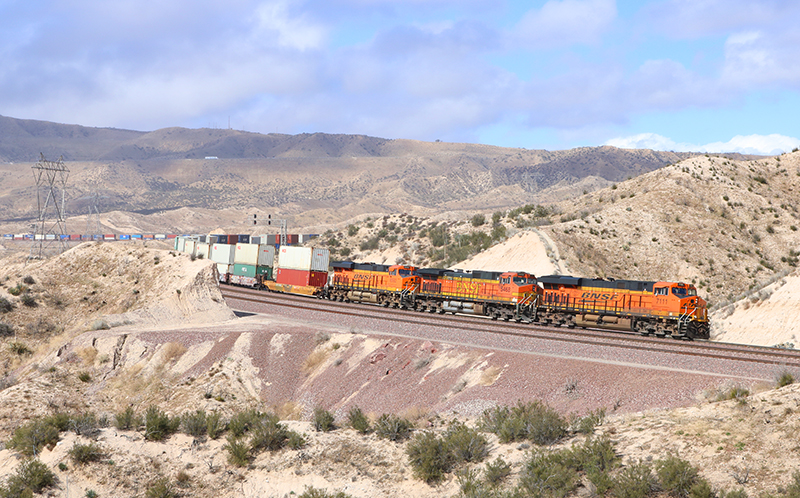 Still on a roll, BNSF has a westbound coming downhill on Main 2, making for a perfectly lit shot near Stein’s Hill. Too bad the NS isn’t on the point, but the railroad gets one point for keeping the horribly-graffitied second unit from leading.

ES44DC 7744 and three trailing units are in dynamics as a westbound freight prepares to duck under Highway 138 near Stein’s Hill. Graffitied units would fall into the “worse” category of Cajon trainwatching.

One day before a storm would limit photo opportunities, the vantage point at Frost (between Hesperia and Victorville) is evaluated. Transient trash is scattered everywhere, and a close eye is kept on the surroundings. BNSF wins again with two westbounds — one stack and one auto train. Is BNSF the only game in town? The answer is no, but BNSF is the unchallenged star of this pass. 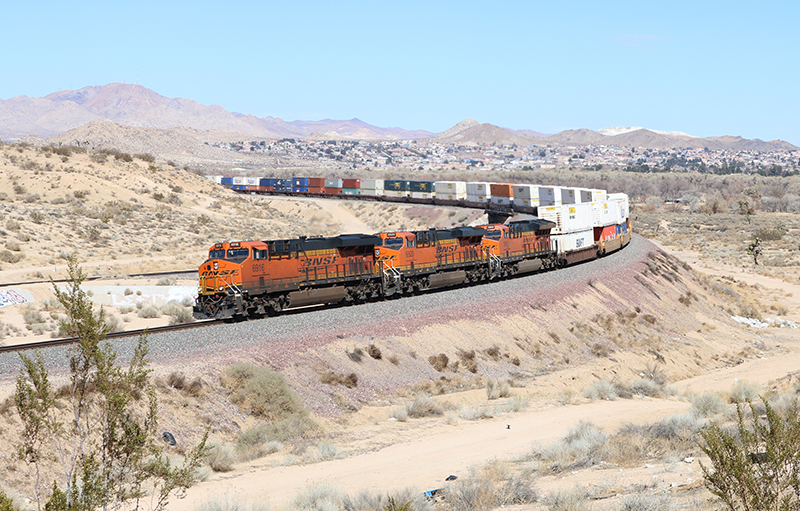 The background is nice, but the photographer is surrounded by transient trash while snapping this westbound stack train. BNSF ES44C4s 6916 and 6520 are working with ET44C4 3860 as the train makes its way toward Hesperia and eventually San Bernardino and Long Beach.

The clouds gather over Cajon, and that’s the cue for Union Pacific. In the rainy mist and howling winds, UP sends a westbound down, curling out of Sullivan’s Curve. Four EMDs and no GEs — not terribly unusual, but definitely marred by another graffiti job on the lead. 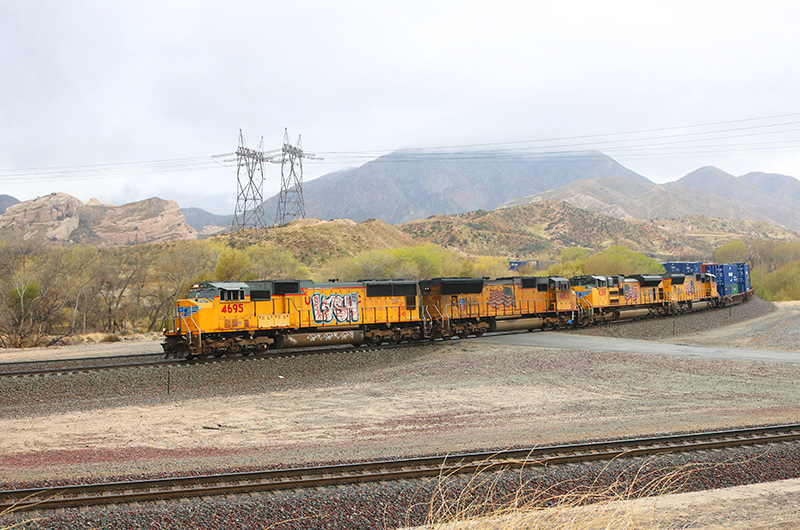 Taking on the wind and light rain is this UP stack train crawling out of Sullivan’s Curve at Cajon. SD70M 4695 has the honors with the remaining EMDs showing something a little less embarrassing from a PR standpoint.

The precipitation eventually subsides while the clouds thin out just a tad, setting the mood for another UP — this time eastbound. The front end shot is okay, nothing to write home about. But the back end shot speaks of the modern era with a DPU — a helper for sure, but no human to wave to. Passing under the cantilever signal, the train marches on toward Yermo, Calif.

After a stretch of three days, Cajon hasn’t really been tested in handling volume. You could take away two mains and the dispatchers would still be leaning back in the chair with their feet up on the desk. Even on a Saturday when the railfan world bets on more traffic.

Then, like no other morning on this trip, not a cloud in the sky. Cold and windy, of course, but the sun is beaming down on Cajon siding with the snow-capped San Gabriel Mountains in the distance. A hot BNSF Z-train is coming down on Main 3 — the steep line — with six units led by an ET44C4.

It exits the stage for the appearance of another BNSF westbound, this time a bare table train on Main 2 with two units. And before the empty stack cars fully pass, a BNSF eastbound freight on Main 1 has four units pulling with all their might.

With barely enough time to catch a breath, five units swing into view at Blue Cut, pulling a BNSF stack train eastbound. On the approach to Cajon, it meets a westbound BNSF auto train coming down on Main 3. Then, just as the four units and auto racks pass, a two-unit BNSF stack train is trying to sneak down undetected on Main 2. But his speed overtakes the auto train, and the undercover work of this double-stack is revealed. 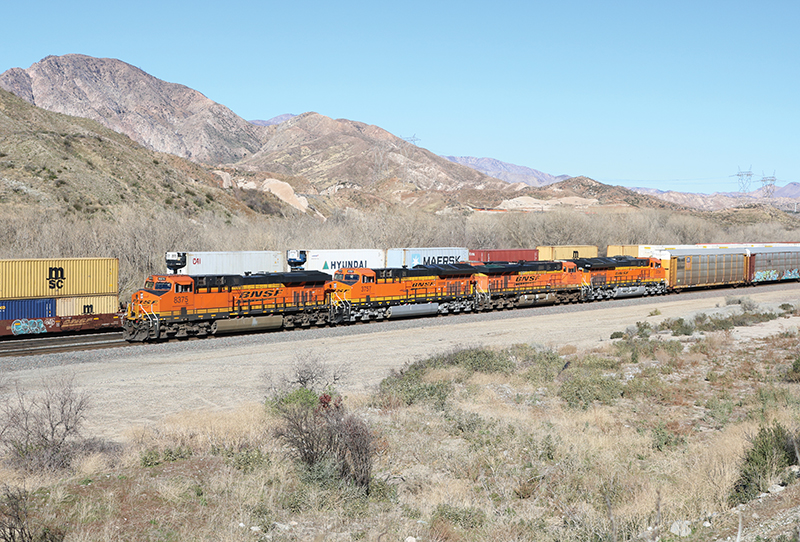 An auto train is westbound on Main 3 with ES44C4 8375 on the point. Two Tier 4 units are included in the power consist. In the distance, the power from the eastbound stack train can be seen pulling into Sullivan’s Curve. And just above the radiators of the second and third units is the lead Dash 9 on a westbound stack trying to hide on Main 2.

Six trains in 40 minutes. Perhaps there’s a chance to hack down a breakfast banana and an orange before the five-unit stack reaches Summit. A westbound UP train rolls up — imagine that. Both the UP and BNSF trains have trailing CSX units, so the sister GEs in the “dark future” paint will greet each other as the UP begins its descent from the top of the hill.

The UP glides through Blue Cut with its four head-end units and a single mid-train DPU assisting in dynamics. The last car disappears in the distance. And before two minutes can tick away, here comes BNSF with an eastbound stack. It clears just in time for a clean view of a BNSF westbound stack with two head-end units and two DPUs. Then on the heels of the eastbound, a six-unit BNSF freight is grinding uphill with a pair of DPUs.

What a rush! With some exaggeration, there were almost as many trains this morning as there were in half a week. And interestingly, no trains were on the old Southern Pacific Cutoff in this frenzy.

In a moment of reflection, you realize this is what Cajon Pass is all about — a dramatic steel highway capable of handling lots of trains. While the past was more impressive than the present for a variety of reasons, it is possible to experience the scope of Cajon’s railway theatrics. Hopefully your extended visit will net at least one noteworthy day.

For better or worse, this is Cajon Pass. 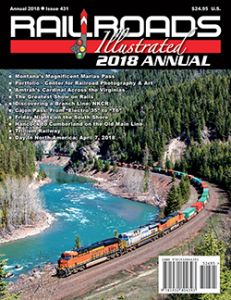