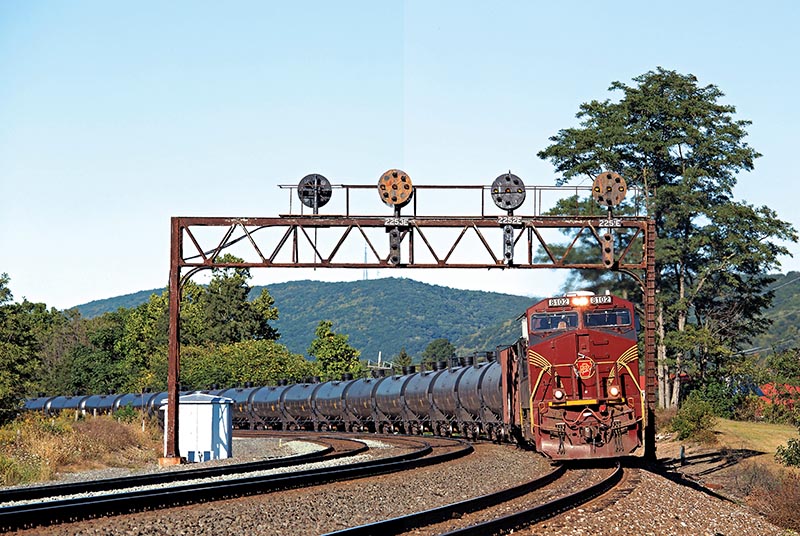 by Dustin Faust/photos by the author

Born and raised in the railroading town of Altoona, Pa., I have always been exposed to trains in some way. At first, it was exclusively model trains. I spent many evenings with my grandfather and brother running our model trains in the attic. While our model railroad didn’t follow any particular prototype, all the staples of the Keystone State made an appearance, including Penn Central, Lehigh Valley, Conrail, Delaware & Hudson, Amtrak, and of course, the Pennsylvania Railroad. While we featured many lines, the Pennsy always took center stage. It’s hard to escape the influence of the old Pennsylvania Railroad, even 50 years after the last Tuscan Red trains rolled into the history books.

My parents and grandparents all lived within two blocks of one another. We also lived within two blocks of the former PRR main line, near Control Point (“CP”) Slope. I vividly remember the roar of westbound trains up the mountain and the grinding of the brakes as they descended downgrade into town. From time to time, my dad or my brother would take me railfanning. My dad bought both of us a lifetime membership to visit the Horseshoe Curve. We would go up to the curve a few times a year. I remember being completely transfixed by the sheer amount of sensory input Horseshoe Curve throws at its visitors. Trains wrap all the way around you in a 220-degree curve and then disappear behind the mountain faces. The auditory experience is just as overwhelming. You have the locomotives struggling for traction at full throttle, the freight cars grinding against the inside of rail of the curve, and then a set of helper locomotives on the rear of the train shoving it up and over the maximum 1.8 percent grade. I would like to think it was these trips up to the Horseshoe Curve that solidified my interest in trains. 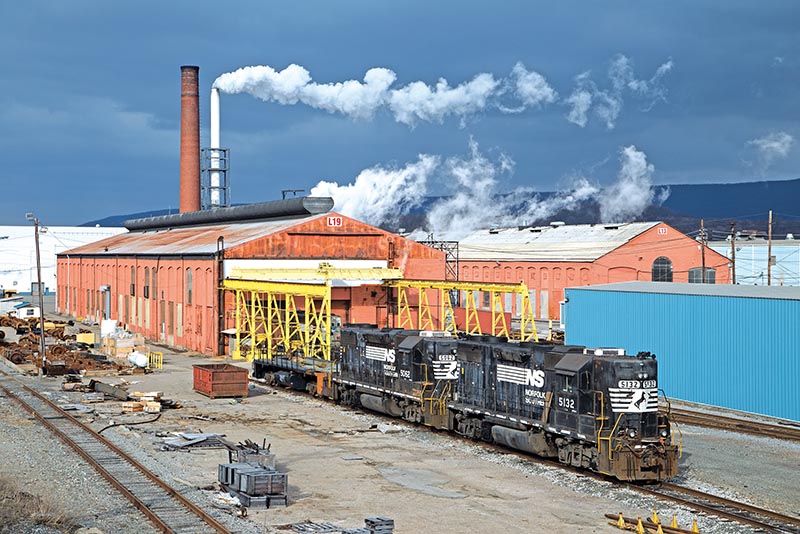 Two high hoods wait their turn for cab upgrades at the Juniata Shops, on March 27, 2015. Both locomotives will receive an NS-designed Admiral Cab, which is fabricated at by Curry Rail Services in Hollidaysburg, Pa.

I first picked up a camera to take a picture of a train in 2011, starting with my iPhone. I soon upgraded to a hand-me-down “point-and-shoot” that I got from my parents. I did much of my earliest railfanning within Altoona, mostly at Alto Tower (milepost 236.7), CP Slope (MP 237.3), and the Brickyard (MP 238).

Not long after I had started taking photographs, I learned of Norfolk Southern’s plans to close Alto Tower, transferring control of interlockings in Altoona to the Altoona East Dispatcher in Green Tree, Pa., in the Pittsburgh Division offices. The project included replacing the classic Pennsy position lights with new color lights. The ultimate result of the project would be the closure of Alto Tower, last manned railroad tower on the Pittsburgh Line and one of only two towers active on all of NS.

It became an early focus of mine to capture as many photos at the Alto controlled interlockings as possible before they were remote-controlled. The affected interlockings included CP Antis (MP 232.5), CP Homer (MP 234), CP Works (MP 235.6), Alto Tower, and CP Slope.

Often, I would find myself up in the morning taking photographs of trains passing Alto Tower. PRR built Alto in 1915. Alto sits at the west end of Altoona, at the base of the eastern grade of the Alleghenies, right next to the 17th Street Bridge — a perfect perch for taking photos. The tower operator had complete control over all the mainline interlockings in the Altoona area. All inbound and outbound rail traffic had to speak to Alto for railroad east or west. 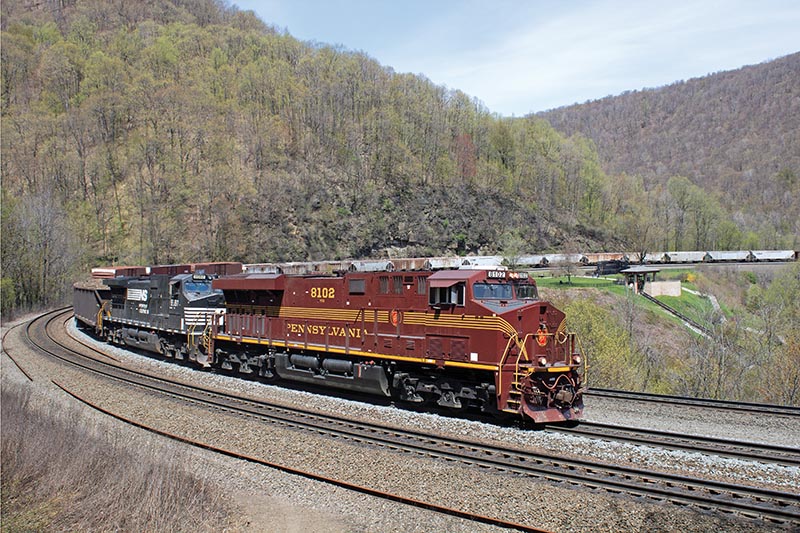 On May 3, 2013, NS 8102 leads NS train 17G around the “World Famous Horseshoe Curve.” One hundred and sixty-three years after its completion, Horseshoe Curve still stands as one of the most important pieces of railroad in the Northeast.

Being a local, I often took scenes like old Alto Tower for granted. Alto operated around the clock for 97 years before falling silent at 8am on June 16, 2012. While here has been some discussion about the preservation of the tower, no firm plans have been made public. For the moment, Alto remains in the same location and is still quite a nice photo prop. The Alto interlocking was completely reoriented in the changeover to dispatcher control and is now know as CP Altoona.

East of Alto Tower, there is a small park with a nice view of the tracks and the Amtrak Station behind the Station Medical Center. It also happens to be right beside the Railroaders Memorial Museum, which is a great place to chat with fellow railfans and catch some lunch while watching trains.

The more I explored Altoona, the more great photo locations I found. Exploration and some help from local friends led me to a spot near CP Works, very close to the 8th Street bridge. It is a good location that lends itself well for morning eastbounds. From here, you can see both eastbound and westbound trains with helpers weave their way all the way through Altoona. This area has photographic options too: you can shoot either from ground level or the road bridge.

Slightly farther to the east of here is the CP Works. It is shootable from both on and under the 8th Street bridge. Sunlight is good for westbounds here around early afternoon hours. CP Works, located on the west end of Rose Yard, serves as a connection between the main line, the Juniata Locomotive Shops, and Altoona’s Rose Yard. The shot from the 8th Street bridge is nice because the Juniata Shops serve as a backdrop or photo prop. 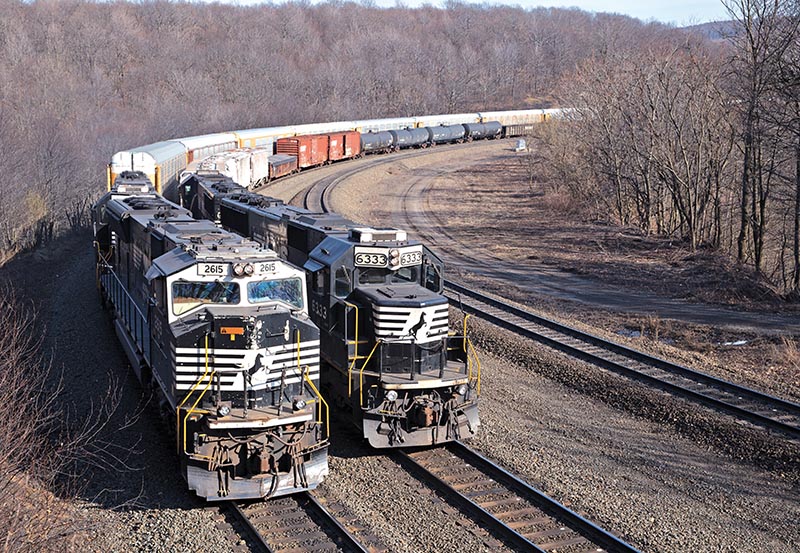 Over the decades since the Pennsylvania Railroad’s demise, Rose Yard has shrunk in size to a shadow of its former self. However, Rose can be a busy place at times. Helpers are constantly arriving and leaving on the relay tracks. Freight trains, coal trains, and other short pool traffic can be seen entering the yard for a new crew, or they can be crewed on the main at the re-crew pad, which is right beside the North 8th Street bridge. While all this is going on, yard crews shift out cars, build locals, and drill out shop cars. Also visible from this bridge is CP Homer — a connection from Rose Yard to the main line. Helper locomotives regularly use it to head out onto the main.

The easternmost end of Altoona is CP Antis, which serves as an interlocking and connection to the east end of the Rose Yard. CP Antis is normally where helper locomotives will couple onto the back of westbounds requiring assistance to traverse the mountain. CP Antis is not easily accessible; however, it can be seen from a distance from a road bridge called “Roots Bridge.” It is a great spot to use a telephoto lens in the morning to capture the signals at Antis with a long freight train coming toward you. This spot was always nice to capture the NS 36A freight manifest, a train that was almost always a monster. It would normally arrive in Altoona in the early hours of the day and usually had a nice cut of John Deere tractors, making the train stand out. Eventually, NS annulled the train, distributing its traffic to other trains…