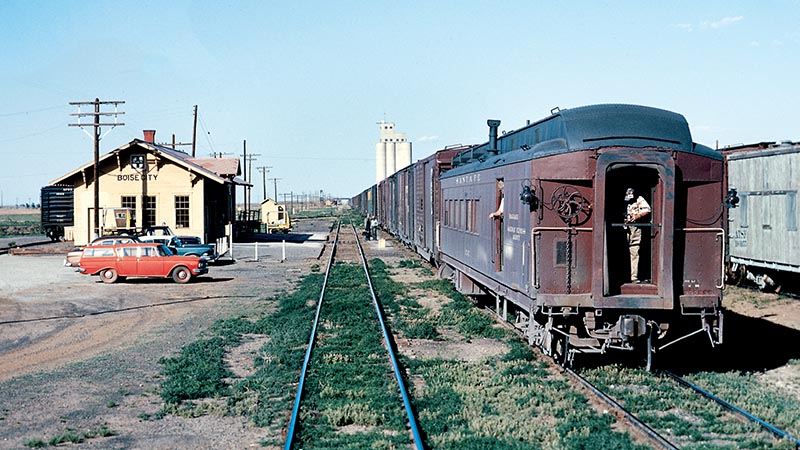 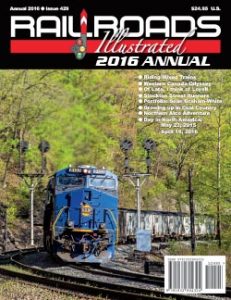 By Gordon Glattenberg/Photos by the Author

What does the phrase “mixed train” bring to mind? The image suggested by Lucius Beebe’s book Mixed Train Daily includes a small locomotive, a few boxcars, and an old wooden coach. In the 1960s and 1970s, I rode some mixed trains that did not quite fit that image.

At that time, Phelps Dodge Corporation had several open-pit copper mines in Arizona and New Mexico. The ore generally ran less than 1 percent copper, so a lot of tonnage had to be hauled the short distance to each mine’s mill. The resulting copper anodes — about 99 percent pure — were then hauled on a lighter-duty rail line to Southern Pacific’s Sunset Route and forwarded to Phelps Dodge’s refinery in El Paso, Texas, where they were processed into higher-purity copper wire.

The Phelps Dodge mine at Silver City, N.M., used electric locomotives in the pit; then, Santa Fe forwarded the ore to the mill in Hurley, and the resulting copper to SP at Deming. The mines at Morenci, Ariz., used diesel power to move the ore and copper to the Southern Pacific connection at Clifton. SP then ran the copper to its main line at Lordsburg, N.M., in a mixed train.

The mine at Ajo, in southwestern Arizona, was somewhat smaller, with GP30s and similar power lettered “New Cornelia Branch” hauling short ore trains, with another train hauling the copper to the SP at Gila Bend six days a week. This line was called the Tucson, Cornelia & Gila Bend, and the train was a mixed, using EMD S2s as power. I photographed and rode this train on several occasions, usually Thanksgiving weekend, because it was the closest such operation to my home in Southern California. 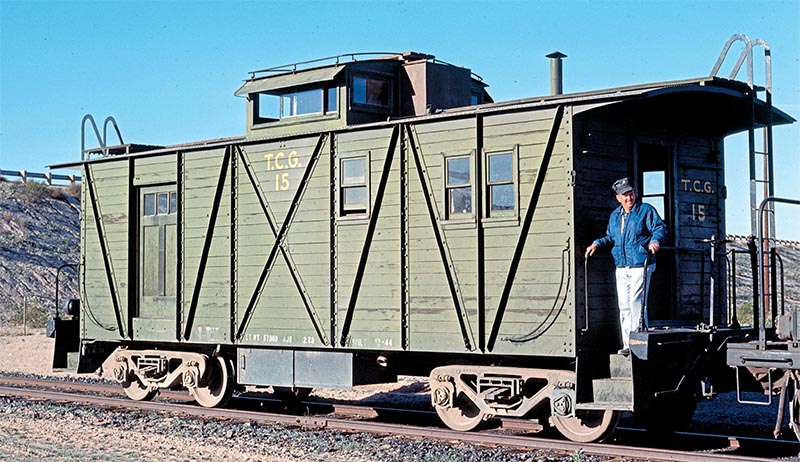 The train to Gila Bend usually had several boxcars and tank cars with supplies for the mine, and flatcars for hauling the copper anodes. The unusual feature was the passenger accommodations: the caboose!

The main challenge in riding the train was getting up before dawn to drive the 40 miles from the motel in Gila Bend to catch the 7:30 a.m. departure from the beautiful station at Ajo. The fare was outrageous: About 80 cents for the round-trip! The 1-and-a-half–hour ride (each way) passed through mostly unspoiled desert scenery, with about an hour spent at Gila Bend while the crew switched the cars. A typical Thanksgiving visit included riding the train on Friday and chasing it on Saturday.

Through the mid-1960s, Santa Fe had a network of mixed trains in the Midwest. One such route that looked particularly interesting was the line from Amarillo, Texas, to Las Animas, Colo. — 236 miles through three states covered by Trains 37 and 38 in the daytime. This line connected the former Santa Fe’s southern and northern transcontinental routes.

For Memorial Day weekend in 1965, the late Chard Walker and I decided we’d ride Train 37 north from Amarillo. We met at Barstow, Calif., and rode No. 2, the San Francisco Chief, to Amarillo. Shortly after we arrived, Train No. 3, the Fast Mail, came west. We were at the station early on May 29 for the scheduled 7:15 a.m. departure of Train 37 and found two other trains ready to depart. Train 93 — a local passenger train for Lubbock, Texas — had E8M No. 80 as motive power, and Extra 124 West was a freight with four EMD FT units. The motive power on these trains had disappeared from California years earlier.

Train 37’s passenger car was a heavyweight coach, demoted from main line service many years previous. Ahead of the coach was a mile of freight cars with five F7s on the point!

Heading north, the train stopped several times to allow the head end to do local switching in small towns, leaving the coach on the rear out in the countryside at least a mile from town. Finally, about midday, we stopped at Etter, Texas, and the station agent drove out to bring the people in the coach into town for lunch. The train later crept forward for a mile until we could board.

At Boise City, Okla., we met Train 38, the only other traffic on the line that day. Eventually, we arrived at Las Animas Junction, where the train took the main line through Las Animas to La Junta, where it tied up. Although our scheduled arrival at the junction was 2:50pm, we actually got there around twilight. However, the main line was equipped with ATS (Automatic Train Stop), but our freight locomotives were not; Santa Fe would not carry passengers in this situation. The entire mile-long train waited at the junction until a taxi arrived to take us the 2.4 miles into town.

Our return to Barstow the next day was on Train 23, the Grand Canyon, via Raton Pass and Albuquerque. The ride on the mixed train had been quite interesting, despite the pictures I took that day showing a total lack of scenery!

Southern Pacific’s mixed train between Lordsburg and Clifton was relatively conventional, with two GP9s as motive power and a heavyweight coach-baggage car at the rear. However, this train was considerably longer than the one from Ajo because the Morenci mines were a much larger operation. The most memorable feature of the consist was the potbellied stove in the passenger car’s baggage compartment. 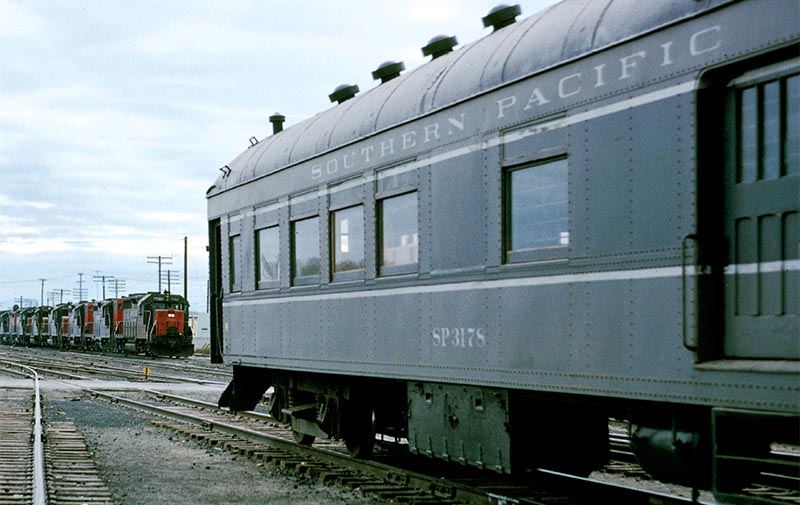 Like the ride out of Ajo, this roundtrip was a comfortable daytime schedule. After the crew and locomotive had done some switching on the Lawrence Branch south of Lordsburg, Train 952 left town at 8:35am daily except Sunday. It took three hours to cover the 70 miles to Clifton, with a scheduled stop at Duncan, Ariz., and four flag stops along the way. Carrying empty flatcars and supplies for the mine, the train was eastbound by timetable direction (away from San Francisco) but actually headed northwest.

Train 953 left Clifton at 12:20pm and took 3 hours, 10 minutes for the return trip. Its main feature was a long string of flatcars carrying copper anodes heading for El Paso.

The sparse countryside out of Lordsburg improved past Duncan as the line followed a canyon of the Gila River. Approaching Clifton, we went through two tunnels. The hills there appeared to be a crumbly conglomerate, but they were actually stable enough not to require tunnel linings.